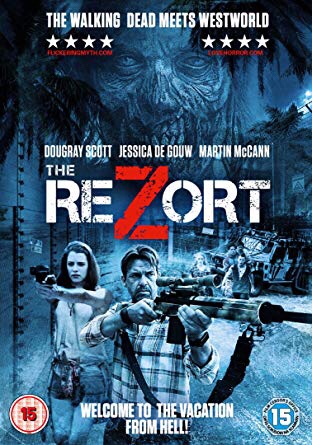 10 years after a deadly virus outbreak that killed 2 billion people, survivors can pay to go an island known as The Rezort and kill some of the remaining zombies.

The Rezort is a movie that I didn’t really have any expectations for as it’s just another movie in the long line of B grade zombie films. However reading the brief synopsis on Netflix it did sound like it wasn’t going to be your average zombie flick as the plot did sound surprisingly intriguing as it almost sounded like a zombie version of Jurassic Park, only with lower quality actors and director, a vastly smaller budget and no dinosaurs of course. The movie takes place 10 years after a virus outbreak which wiped out a third of the world’s population. With the war against the undead won, the last remaining zombies are rounded up and placed onto an island where a savvy businesswoman takes advantage of the situation and builds The Rezort, a holiday retreat where you pay money to shoot zombies. The latest tour group would unknowingly be the last group as the systems crash and the zombies escape their restraints and fenced off areas and go on the hunt to quench their thirst for the living once more. With a race against time to survive, the tour group must get off the island before being turned into the ever growing number of undead.

The acting was what you’d expect from this sort of cast with mostly inexperienced actors with Dougray Scott being the biggest name and he’s not exactly a household name. At times there were some decent displays of acting but generally the performances were rather mediocre but again, I didn’t expect Academy award winning acting so I was ok with it. The story was the biggest asset this movie had and it was utilised extremely well. The premise is interesting and as the movie goes on the plot thickens and more details are discovered, including The Rezort’s dirty little secret, the story just keeps on adding more depth which is something that these straight to DVD horror movies fail to do more often than not. Some of the characters died valiantly but not in vain but the one thing that this movie severely lacked was gore. While there were little amounts of horror and gore here and there, there just simply wasn’t enough of it which I was a little disappointed with as the one thing that low budget horror flicks tend to provide is over the top gore and lots of it. I suppose The Rezort was trying to go against what’s considered the norm for the type of movie it is but I would’ve like to have seen gorier and bloodier death scenes.

Overall, The Rezort was an interesting little zombie movie that was better than most B movies that get produced. With a greater amount of gore and horror this movie could’ve been a great deal better. Still a decent attempt though.