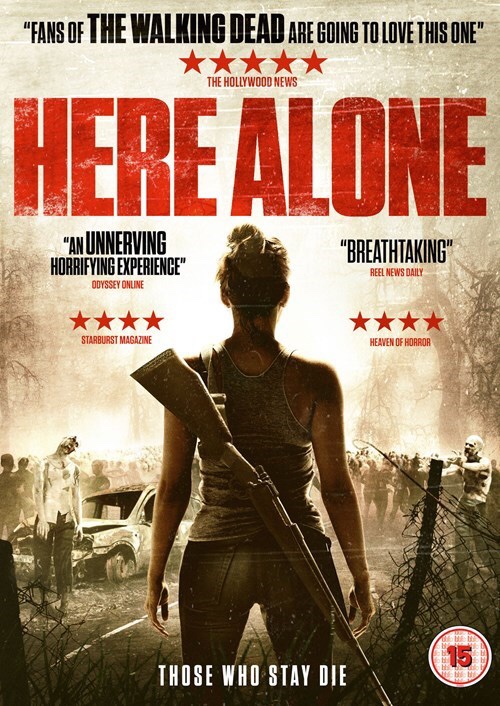 A woman is isolated in the middle of the woods as she tries to survive a mysterious epidemic that has killed off most of society.

After yesterday’s tragic start to my month of movie watching I decided to watch another unknown, low budget flick in the hope that Netflix still has some hidden gems lurking within its catalogue. Having a quick read of the plot before pressing play I anticipated quite a generic zombie/infection outbreak type of movie and there have been so many that I’ve seen in the past that have been very mediocre so hopefully Here Alone can rise above my expectations.

Here Alone started off very slowly but was extremely eerie and intense as there were very few words spoken but the movie used its music incredibly effectively to try and hook the audience in. Lead actress Lucy Walters does a great job at displaying a range of emotions without speaking and I felt she really did a terrific job throughout at telling her story through her actions and facial expressions. Her co-stars Adam David Thompson and Gina Piersanti weren’t as good in their performance as Lucy Walters but did provide reasonably decent support as they played a step dad/daughter team who were looking to head north away from the infection in a hope to find a safe haven.

Due to Here Alone being a low budget movie it was very clever in utilising just the sounds and the snarls of the infected rather than showing them on a constant basis. The appearance of the infected throughout the movie is very scarce but I think that was down to the budget otherwise the entirety of it would be gone had they constantly had to put the extras through make up each and every day. The producers and director were pretty savvy by just using the unsettling noises of the infected and only showcasing them at the very end during the most frantic scenes of the movie. While this aspect of the film was cleverly done I feel that the flashes of nudity and the romance angle seemed unnecessary and not worthwhile to the story. Also the Olivia character was very unlikable and her nasty streak at the end of the movie was incredibly predictable and rather routine for this kind of movie to have that snake-type character.

Overall, Here Alone was a good attempt at an infection movie and made use of its budget very well as less is sometimes more and this was the case here. With a few tweaks here and there and a different ending this movie could’ve been a great deal better. I can’t moan too much though as this was a vast improvement on the movie I watched yesterday.