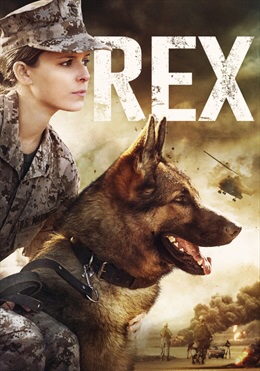 The true story based on the life of a young marine corps dog handler who was deployed to Iraq to sniff out IED’s. Corporal Megan Leavey along with her dog Rex saved countless lives and after leaving the marines Megan petitioned so she could adopt her military dog for the last few years of his life.

Movies that revolve around the human relationship with dogs always hit me right in the feels and Rex is no different. While I’ve never had a dog as a pet so I can’t say I fully relate to the feeling of having that special connection of unwavering love between myself and a dog, I do however feel I’m a dog person who just wants to play with and touch all dogs and my wife would back me up with that statement.

Rex is the remarkable true story of Corporal Megan Leavey who doesn’t really know what she wants to do with her life except escape. Escape the mundane town she lives in with her mother, escape the monotony of working a dead end job with no real opportunities. She decides to take the miraculous first step by joining the marine corps which initially she didn’t look as though she was cut out for that kind of work but she found her calling as a dog handler and was eventually paired up with German shepherd Rex. Together they formed a bond built on trust and respect which blossomed into love. Corporal Leavey and her IED sniffing dog were deployed to Iraq during the war in the mid 2000’s where Rex flourished sniffing out countless IEDs and explosives which saved hundreds if not thousands of lives. Megan and Rex get injured in an attack which cuts their time a little short as they’re sent back to the States for rehab and while Megan decides not to re-enlist, Rex is given a new handler and redeployed to Afghanistan. Feeling that Rex has served his time and done enough, Corporal Leavey, who feels lost without him at her side, campaigns to try and adopt Rex so he can live out the last few years of his life peacefully like any triumphant hero deserves to.

Kate Mara plays Corporal Megan Leavey and while she didn’t deliver an outstanding performance she did deliver a solid piece of acting that was at times full of emotion. One problem Mara faces is at times her performance does appear to be a little void of emotion but I think it’s due to the nature of her rather monotone voice as opposed to a lack of skill. It’s only in the last 25 minutes or so of the movie that she fully delivers deep emotion and I felt that it was after the inspiring speech given to her by her father (Bradley Whitford). The final few scenes are awe inspiring as it shows what determination and loyalty can bring you as long as you fight for it hard enough and it was a real heart melter.

Rex had a surprising amount of humour mixed into its story especially the scene where Megan learns she gets to become a dog trainer and is given an ammunition can to prove her dedication. It caught me off guard a little but it was a delightful bit of humour to mix in with the seriousness of the story. The relationship that Kate Mara shared with Ramon Rodriguez, who played fellow dog handler Cpl. Matt Morales, felt genuine and again there were elements of comedy mixed in with the heartwarming story building around them. The action sequences were sparse but effective as we only witness one firefight while Leavey is deployed in Iraq but it was well shot and had its moments of tension and while this movie was primarily about the bond between Megan and Rex I would’ve liked to have seen a little more from the missions which they went on as they completed over 100 of them and we were only treated with a fraction of that.

Overall, Rex is a wonderful little film about the bond that can develop between a person and a dog. It depicts loyalty, dedication and love as the feeling is clearly mutual between the two of them and if you have a soft spot for dogs be sure to watch this with a tissue.