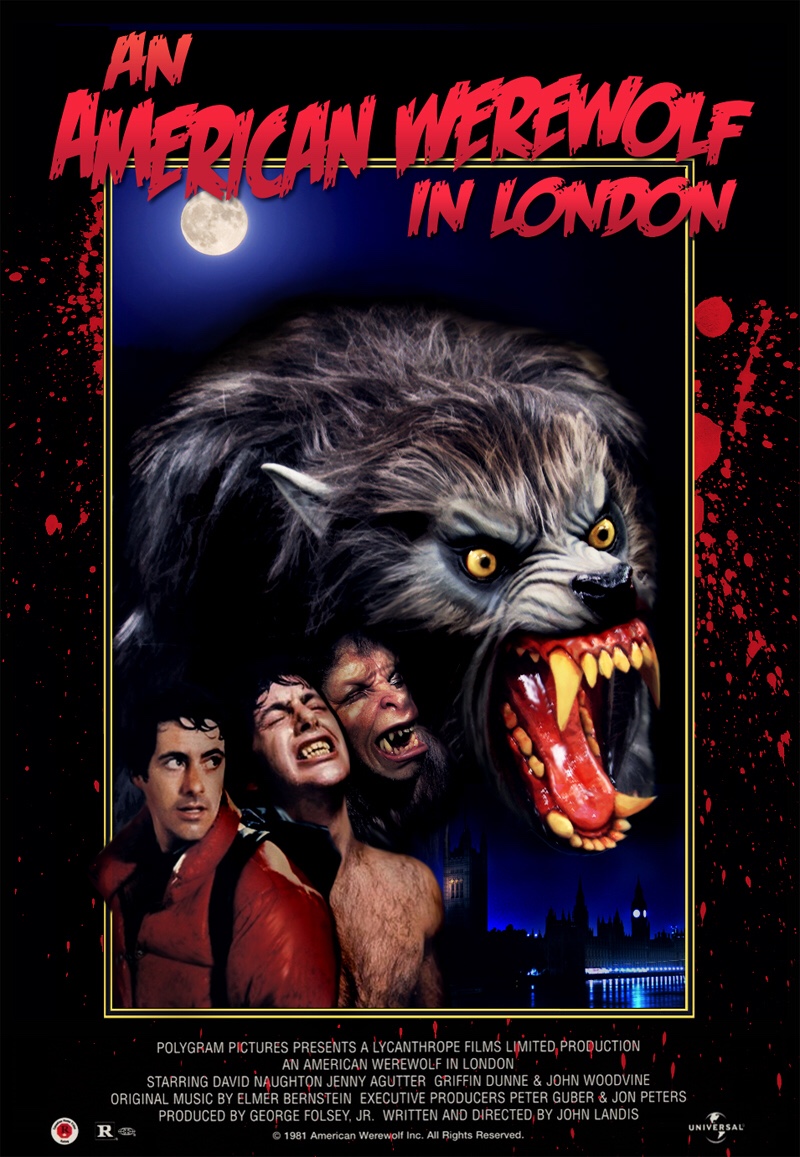 Two Americans on a walking tour of the UK are attacked by a werewolf in the Yorkshire Moors. One of them is killed but the other survived and is taken to London for observation. When the next full moon occurs he finds himself going through some distressing bodily changes.

Many consider this movie to be a true horror classic and while I’ve always been intrigued by it, I’ve always been a little skeptical at the same time. There are plenty of movies from the past that are considered classics and great pieces of cinema but upon watching them they simply don’t hold up to modern day viewing or expectations. Maybe it’s a simple case of being great at the time of release but not for future audiences. With all that a side it was time for my wife and I to delve into it and see what An American Werewolf in London had to offer.

The opening couple of scenes where we follow the American guys (David and Jack) walking along the Yorkshire Moors in search of a little village was a nice way to introduce the audience to the main characters. When they arrive at The Slaughtered Lamb pub I found the movie to be entertaining with quite a large amount of humour, which I wasn’t expecting at all. Brian Glover plays one of the Yorkshire locals in the pub and is great as he’s a combination of funny and insanely angry. As we move on to the next few scenes where the two guys get attacked by a werewolf while walking in the dark the intensity increases and as Jack is getting ripped apart by the werewolf it’s surprisingly gory and graphic for the early eighties. After this scene however David wakes up in a London hospital, which made no sense to take him hundreds of miles to a hospital but I was willing to overlook that minor detail to try and focus on the rest of the movie.

Unfortunately, this is where the movie takes a turn for the worse and never truly recovers. The next hour or so of the movie is painfully slow and feels incredibly drawn out as rather than focusing on the werewolf aspect of the story, the movie begins to focus on the romance between survivor and carrier of the werewolf gene David (David Naughton) and nurse Alex (Jenny Agutter) which I was completely disinterested in. With that being said Nurse Alex was a very good character as she did feel warm, sweet and genuine but I just didn’t care to see a love story develop in what I was expecting to be a horror classic. David Naughton’s acting was quite whimsical despite being poor at times and the sex scene that both he and Jenny Agutter shared was so unnatural looking that it looked more awkward than sexy, arguably one of the worst sex scenes I’ve seen in a movie.

To finish, I’ll end on some of the positive points which revolve mostly around the makeup. After Jack is mauled to death by the werewolf he comes back to see David as he’s trapped in limbo between being alive and the afterlife but each time we see him he changes in appearance as if to show decay. The makeup used the first time we see him with his throat ripped apart was fantastic and the detail was remarkable considering this movie is over 35 years old. Also the scene where David started to transform to a werewolf for the first time was also great to watch especially the transformation of the hands and the spine. The movie wasn’t scary in the slightest like I had anticipated but that particular scene was rather creepy.

Overall, An American Werewolf in London was an ok movie at best as it had some great use of makeup and was more humorous than I had anticipated but the movie was slow and lethargic and needed to feature the werewolf more often. Probably wouldn’t watch again but worth watching just the once to satisfy my intrigue.