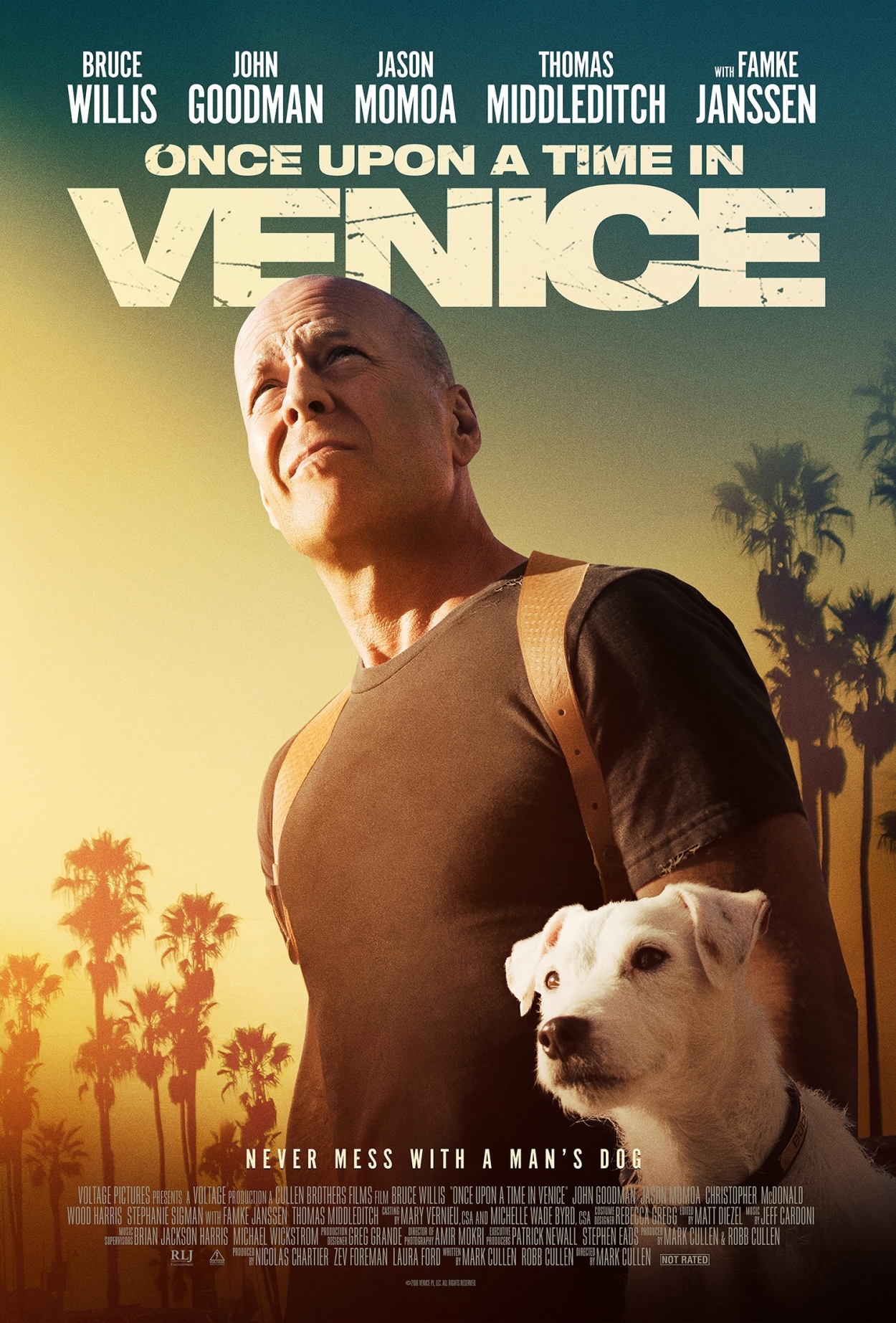 A private investigator in Los Angeles has his personal and professional life thrust into one as he tries to get back his stolen dog back from a gang headed by a ruthless drug dealer.

I’m going to start by admitting that I wasn’t really expecting much from this movie. Once Upon a Time in Venice is one of those films that constantly finds its way into my “recommended for you” section on Netflix and I keep passing by it without consideration. There are two main reasons why I’ve avoided this movie for the past 8-10 months or so and one of them is that the movie poster doesn’t scream excitement to me. I mean just look at it, it’s an image of Bruce Willis with a small dog with the tag line “never mess with a man’s dog”. Nothing about that screams exciting as not even Bruce Willis has that megastar appeal with me anymore. The second reason is Bruce Willis and the lack of quality in his last dozen or so movies. The ageing action hero seems to be putting his name to any old nonsense nowadays as it appears that quantity rather than quality has taken over the latter years of his career. I’ve got to think back to 2012 to remember the last quality movie that Bruce Willis featured in, which was Looper. With these apprehensions put to one side I finally gave in to Netflix’s persistence and decided to check out Once Upon a Time in Venice to see if Netflix really knows my film taste or not.

Unfortunately Once Upon a Time in Venice was exactly the type of movie I expected it to be, a largely mediocre and below average flick that offered some entertainment but not much. Bruce Willis is very disappointing in his role as private investigator Steve Ford. Having helped a friend get his car back from a notorious drug dealer (Jason Momoa) Steve lands himself in hot water as he must do business with the very same drug dealer in order to retrieve his stolen dog. The plot was a little over crowded as there was just so much happening all at one time that it was quite easy to get lost amongst the amount characters and side storylines. The final 25 minutes however did somewhat redeem the story as all the storylines merged into one and were all slowly getting finalised and it became a lot easier to follow what just happened and what was about to happen. Bruce Willis’s character tried to take on a lot of the comedic responsibility in this movie but a lot of his delivery felt forced and unnatural which was unusual as Willis has proven in the past he is more than capable of being a funny actor.

Once Upon a Time in Venice had a surprising amount of famous names and familiar faces as the movie featured John Goodman, Jason Momoa, Famke Janssen, Adam Goldberg, Kal Penn as well as Bruce Willis of course. Unfortunately very few of of the actors offered much in the way of entertainment and the best performer came in the way of the lesser known Thomas Middleditch who played John, Steve Fords investigative partner. He was witty throughout and really offered what everybody else seemed to lack and that was a little personality and charisma.

Overall, this movie was the right amount of poor that I had anticipated and apart from Thomas Middleditch and the final 30 minutes of the movie there wasn’t much to praise. One to avoid, unless super, super bored.