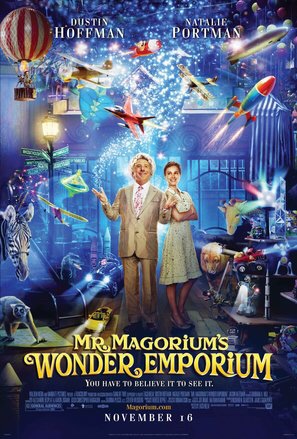 Molly Mahoney is the manager of Mr Magorium’s Wonder Emporium, a magical toy store which is both wonderful and shrouded in mystery. Mr Magorium decides to hand over the reigns to her which causes a dark cloud to engulf the store.

When this movie was released I would’ve been 19 years old and a little outside of its demographic but I also did avoid watching this movie initially as the movie poster made Dustin Hoffman look as though he was going to be playing a Mr. Duncan from Home Alone type of character, which I did not approve of. In my head I thought they were trying to rip off that wonderful little character in the second Home Alone movie and I didn’t want to see my memory of Mr. Duncan get bludgeoned at the hands of a new children’s movie. Fast forward 11 years, my wife borrowed this movie from a work colleague and I begrudgingly agreed to watch it too, which probably isn’t the best attitude to have while heading into the movie but I just couldn’t shake my displeasure of the movie I thought I was about to watch.

Once the movie began and I saw the toy store I thought my fears had come true as even the little details down to the cash register looked like the register used in Duncan’s Toy Chest but thankfully the movie did change lanes and it wasn’t the rip off of Mr Duncan I had initially anticipated. Dustin Hoffman plays the wackily eccentric Mr. Magorium who is 240+ years old and has an aura of unexplainable magic around him and his wondrous toy store. His store manager Molly Mahoney is played by Natalie Portman and she gets informed that Mr. Magorium is leaving and has left her the store to continue the day to day running of it. Once the changeover takes places the store goes through some serious changes as a darkness covers the store and it appears all hope is lost as Molly doesn’t belief in herself enough to continue the legacy left behind by Magorium.

Despite being different to what I had feared this doesn’t necessarily mean that the movie was good. I enjoyed Dustin Hoffman as he plays the ludicrously insane yet lovable Mr. Magorium with such great innocence in both his voice and demeanour. Without Hoffman, this movie would be awful but his performance made it the slightest bit tolerable which is a shame as his co-stars are Natalie Portman and Jason Bateman who are both quality actors in their own right, especially Portman. Unfortunately Natalie Portman, for all her brilliance in other movies was the worst performer here which is the most surprising thing about this movie. I’m so used to seeing Portman produce some great dramatic performances in movies such as V for Vendetta and Black Swan that she appeared both awkward and out of place in this light hearted family movie. It’s almost as though she doesn’t know how to act fun as she appears rigid and uncomfortable throughout the movie and the scene where Dustin Hoffman is dancing on the bubble wrap and she is watching on laughing was so poorly acted that it was tough to watch on as she struggled to adapt to her role. Outside of Dustin Hoffman the comedy was largely non-existent and Zach Mills who played store frequenter Eric was very dislikable despite his sad story of being a loner who all the other kids avoid playing with.

This movie didn’t quite know what it wanted to be as at times it seemed like it was attempting to rip off so many classic movies such as Home Alone II: Lost in New York, Willy Wonka and the Chocolate Factory and Mary Poppins to name but a few. Mr Magorium’s Wonder Emporium definitely scored no points for originality and seemed to waste the comedy talent of Jason Bateman as he was never really given the chance to flourish during the course of the movie.

Overall, Mr. Magorium’s Wonder Emporium was a largely poor movie that is only really watchable just for the performance from Dustin Hoffman, the rest just doesn’t match up.