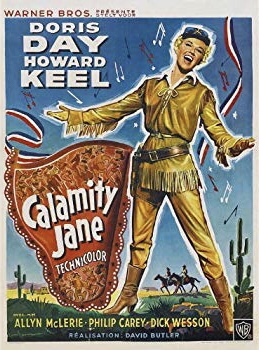 The story of Calamity Jane from Deadwood, Dakota Territory. She’s an Indian scout who’s handy with a gun and doesn’t mind telling you about her exploits. She travels to Chicago to bring actress Adelaid Adams to her town’s theatre but ends up bringing back the wrong person. After bringing said person back to Deadwood, Calamity begins to discover her feminine side.

Last weekend my wife was watching a few YouTube videos which I happened to overhear and like the sound of and when I asked what they were she said they were some of the songs from the musical Calamity Jane. Ever since I’ve met my wife I have become more interested in watching musicals whereas before I didn’t really care much for them. I have watched numerous musical movies as well as seen a few live performances in the theatre so after managing to get a hold of a copy of Calamity Jane on DVD this weekend, it was time to watch it and see if the rest of the movie was as enjoyable as the songs I had heard.

As big of a name that Doris Day is I haven’t seen a single one of her movies until now and to be honest it was definitely a good place to start. While she has probably featured in a few better movies than Calamity Jane, I’m not sure if she would’ve featured in a movie that was as fun as this one. Calamity Jane started off very well with an excellent opening song and that pretty much set the tone for the rest of the movie. While some of the other songs throughout the movie weren’t as enjoyable or as memorable, there were one or two more that I thoroughly enjoyed and could feel my feet tapping away. Doris Day was brilliant as title character Calamity Jane and this has made me eager to check out more of her work in the future.

Her supporting cast was also very good as she was joined by Howard Keel, Ally Ann McLerie and Philip Carey. Howard Keel is an actor that I enjoyed watching in Seven Brides for Seven Brothers some years back and he was equally as great to watch here as Wild Bill Hickok who changes from Calamity’s friend to love interest throughout the course of the movie. Ally Ann McLerie who played Katie Brown, the actress who was mistakenly brought to Deadwood instead of Adelaid Adams, was fantastic. Her singing and dance performances were really fun to watch and it shows in older musicals like this what a difference trained singers/dancers can make to a musical performance. I also really liked the setting and costume design, especially the costume and character transformation of Calamity as she begins to become a little more feminine the longer she spends with Katie Brown.

Overall, Calamity Jane was good fun and while it may not be a classic or musical masterpiece there were some good performances and a couple of great musical numbers. Well worth watching for sure.