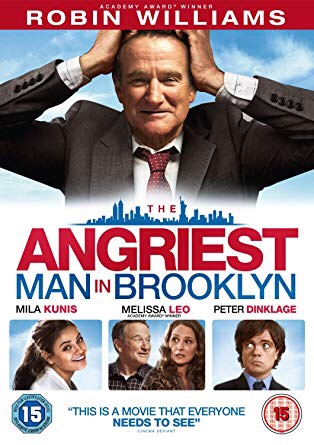 A man who lives his life constantly in anger is mistakenly told he has just 90 minutes to live due to a brain aneurysm. He promptly sets out on a journey to reconcile with his family and friends before he passes.

The Angriest Man in Brooklyn was one of Robin Williams’ final movies before his sad and untimely death and he is the only reason why I wanted to watch this movie. While supporting actors Mila Kunis and Peter Dinklage are not to be overlooked they just aren’t in the same league as Robin Williams in terms of appeal. Williams plays Henry Altmann, a man who lives his life in perpetual anger since his son died in a hunting accident two years before this movie takes place. He can’t help himself as he constantly is overcome by rage but after a visit to the hospital he’s told that he has a brain aneurysm. After receiving the news he goes into a fit of rage at Dr. Gill (Mila Kunis), who is covering for Altmann’s regular doctor, and Dr. Gill suffers a moment of weakness as she tells him that he has 90 minutes to live, despite not being true. While Henry Altmann initially doesn’t believe what he’s been told, it does cross his mind that it could be true and he begins reflecting upon his family life which is far from ideal and he tries to make amends with his wife and one remaining son before it’s too late. It’s a story of forgiveness and second chances as we are taken on a journey of redemption for both Dr. Gill and Henry Altmann.

This movie had its moments of good comedy but for the most part it was rather dreary and although Robin Williams was the shining star here, he wasn’t close to his best. The saddest part of this movie is that it holds some correlation to his real life as instead of playing his usual jovial self that we so often have fallen in love with over the years, he plays a sad depressed man who seems to have hit self destruct mode. The attempted suicide scene was a little tough to watch knowing now how he passed away. Mila Kunis was pretty good as she was able to make an emotional connection with Henry towards the end of the movie but outside of that she wasn’t quite up to her usual standards as she came across trying too hard to suit the character and her portrayal of the characters personality really didn’t feel natural. Peter Dinklage too was a little disappointing as he didn’t really have much to do, he was just kind of there without providing anything to the story besides being the brother of Henry. The shots of New York City were very good as this movie really captures the gritty nature of the city and how easy it is to lose your cool in a city which is so compact and busy.

Overall, The Angriest Man in Brooklyn has its moments with some pretty good messages intertwined within the story but it didn’t really do much else. Robin Williams was decent and a small cameo from James Earl Jones was very good but outside of that the movie struggled to entertain.