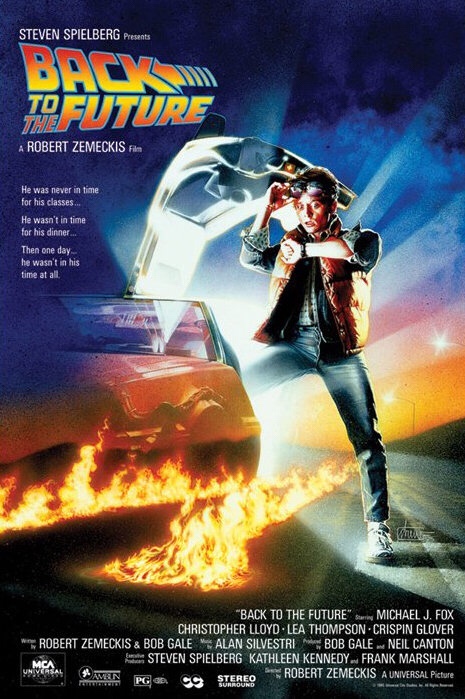 Marty McFly is a seventeen year old high school student who accidentally gets sent thirty years into the past. With no way of getting home he must find Dr. Emmett Brown and convince him to help. He must try and make sure he doesn’t interfere with anything that may change the future that he knows which means making sure his parents still fall in love.

Yes yes yes I know what you must be thinking, haven’t seen Back to the Future before? Impossible! Well it’s true, it’s something that has always seemed to pass me by. I have very vague recollections of seeing a few scenes from either the first or the second movie but never have I ever sat down and watched the trilogy of movies in their entirety. Another reason why I’ve avoided watching this movie sooner has been the hype and the praise it receives by pretty much everybody. Movies which carry such a tremendous amount of expectation more often than not fail to live up to their billing after I’ve built it up so much in my head that I generally feel a little short changed. With my concerns pushed to one side it was finally time to watch Back to the Future Some 33 years after its initial release.

Well ladies and gentleman I can safely report that Back to the Future’s hype is completely justified and then some. It truly deserves its recognition as being a real classic movie and I can understand why it ranks so highly amongst so many people. It’s in the top 50 movies on IMDb’s top 250 list and everybody who I’ve heard speak about this movie and the trilogy as a whole never has a bad word to say and I’d like to join the club.

Christopher Lloyd as Dr. Emmett Brown was truly mesmerising and the highlight of a well rounded ensemble. He’s the crazy scientist who comes up with the insane notion that time travel is possible and he makes it so and his mannerisms and interactions with Marty are incredible to watch. Michael J. Fox who is an actor I do tend to find annoying more often than not really grew on me as an actor with his performance as Marty and I will look to giving more of his movies another try with a bit more of an open mind. I really enjoyed the idea of Marty McFly accidentally intercepting his parents moment where they fall in love and having his mother be besotted with him. This was great to watch and provided the movie with that much needed suspense to go along with the comedy as Marty had to get creative and deflect his mother’s attention from himself to his would be father.

Having been released back in 1985 this movie has aged incredibly well and still holds relevance and doesn’t allow its age to dampen my enjoyment. Many movies hold up very well and can be watched time and time again without feeling dated but other movies from the eighties and even the nineties really don’t age well at all and feel as though it would’ve been good to watch upon its initial release but doesn’t quite translate very well to present day viewing. Thankfully Back to the Future conforms with the former as opposed to the latter and at some point I feel this will be a movie that I will rewatch time and time again without boredom sinking in. The only real problem that I had with the entire movie was the implied attempted rape that high school bully Biff was about to commit. While it was somewhat necessary in order for George McFly to rescue his future wife from the hands of his tormentor, I feel that the possibility of rape was a little darker than it needed to be.

Overall, I completely agree with the majority of people who hold this movie near and dear to their heart. It truly is a wonderful movie and has made me excited to continue the trilogy sooner rather than later. I’m pretty certain everybody has seen this by now but if you’re like me and allowed it to pass you by, I implore you to watch it, you shall not be disappointed.