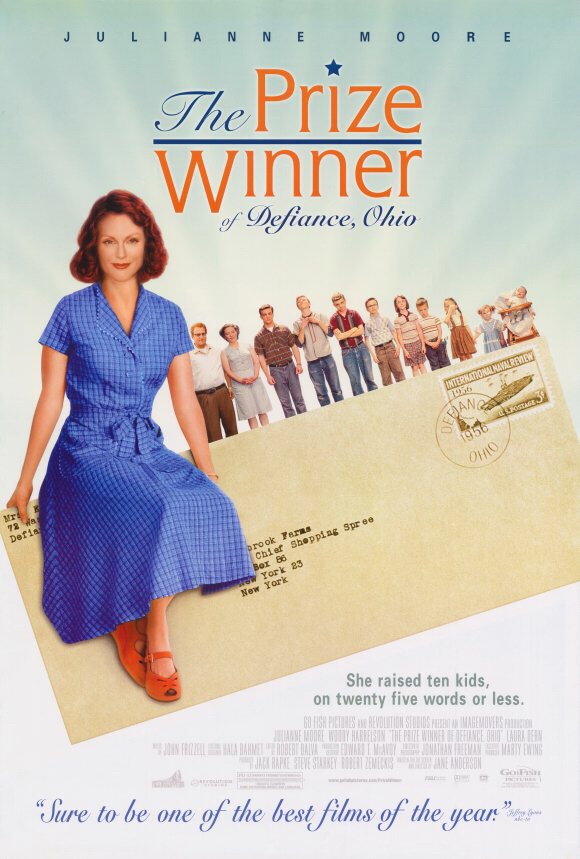 The remarkable true story of Evelyn Ryan, a housewife and mother of ten children who enters poetry and jingle writing competitions in order to win prizes to keep the family afloat.

I had never heard of this movie prior to seeing it pop up on Netflix and usually I’m not too eager to watch a Julianne Moore movie as she can be very hit or miss but her co-stars were listed as Woody Harrelson and Laura Dern, both of which I thoroughly enjoy watching so I thought I’d give it a watch and see what happened.

The plot of the movie is fairly straight forward as Julianne Moore stars as Evelyn Ryan, a housewife, who is married to Kelly who is played by Woody Harrelson. Together they have ten children and struggle to get by on Kelly’s wage as a machinist. Kelly used to be a coroner but an accident forced him out of a job and into becoming a machinist, he is also a man who battles with alcoholism which brings a little resentment from the rest of the family as his money usually ends up at a liquor store. If it wasn’t for Evelyn the family would be in dire straights, she looks after the kids, cooks the dinner, makes sure the house is kept tidy as well as entering poetry and jingle writing competitions in order to win prizes which are the one thing that keeps the family going at times. When Kelly keeps spending his money on alcohol, Evelyn has to come up with cash prizes to make sure the bills are paid and freezer filled. Kelly foolishly takes out a second mortgage without letting his wife know which comes back to bite him in the ass which puts intense pressure on Evelyn to come through with a big contest win or they’ll have their family home taken away.

My initial apprehensions regarding Julianne Moore were completely blown away by her mesmerising performance. Her character Evelyn constantly looked on the brighter side and remained in high spirits even when everything was collapsing around her and her happy-go-lucky outlook on life was incredibly infectious. Her chemistry with Woody Harrelson was great and his performance as Kelly Ryan was equally as impressive as Julianne Moore’s. Kelly is a man struggling with the fact that his wife is considered to be the bread winner by his colleagues and on top of that is a drunk. He’s not a hateful, abusive drunk as they stereotypically are in movies, he comes across as somebody who feels ashamed with his condition and displays real pain and emotion when he sees the damage his alcoholism causes and Woody Harrelson does a tremendous job at portraying the emotional human side of the character.

While the story isn’t exactly packed full of excitement or drama it’s told in a fun, entertaining way which also has you hooked by the end as the tension increases. I really enjoyed the fact that this was based on a real family with the author being one of the ten children and it was a nice touch to include the real people in the closing moments of the movie. The Prize Winner of Defiance, Ohio was such a light hearted feel good story that can also be seen as nostalgic to people from that particular era and if I had one criticism it would be the size of the part that Laura Dern had. I had assumed that Dern would’ve been given a larger role given her ability and star status but her role was small but still enjoyable to watch.

In conclusion, this movie offers a tremendous feel good story that gives off a great positive message and vibe and a great showcase of acting talent from the two main stars involved. A delightful little movie that deserves wider coverage and recognition.