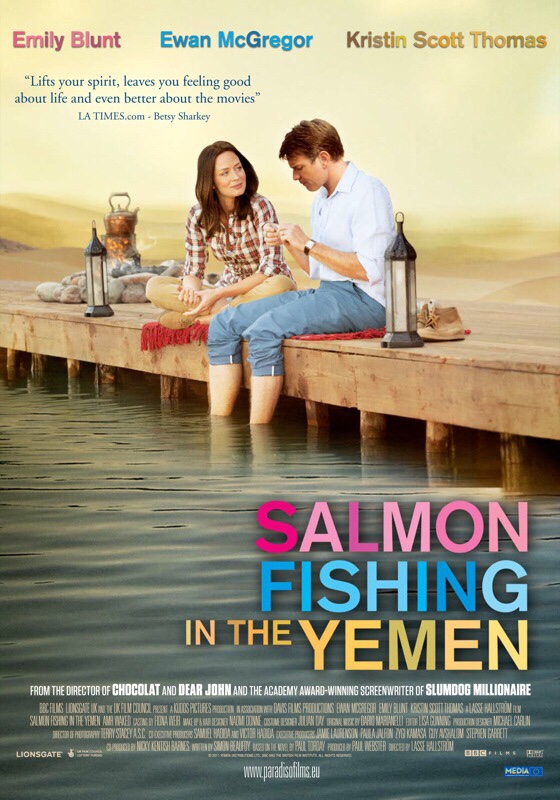 A Yemeni Sheikh has the idea of bringing salmon fishing to his country and due to poor Anglo-Arab relations because of the war in Afghanistan the British Government see this project as the ideal press opportunity to boost those relations in the public eye. A fisheries expert is approached by the Sheik’s consultant and it’s his task to make the impossible possible.

This movie is an adaptation from a book entitled with the same name but having never read the book I didn’t really know what to expect out of this movie. The cast seemed pretty strong as it had the likes of Ewan McGregor and Emily Blunt on display so I was keen to find out what Salmon Fishing in the Yemen was all about, apart from fishing salmon in Yemen of course.

Ewan McGregor plays Dr. Alfred Jones, a fisheries expert who suffers with Asperger’s syndrome and he is unknowingly witty and quite charming throughout. His chemistry with Emily Blunt, who plays the Sheikh’s consultant Harriet, is very good as their professional relationship flourishes. The pair of them do very well in their respective roles and as you’d expect from two wonderful actors their performances are more than adequate. The Yemeni Sheikh is played by Amr Waked who is incredibly pleasant and despite the idea of bringing salmon fishing to Yemen being a ludicrous rich mans experiment, it’s actually to bring a community of togetherness to his people which is a real nice sentiment and gesture. The highlight of the movie though came in the shape of Kristin Scott Thomas who plays the British Prime Ministers press officer. She’s incredibly brutal and cut throat as well as being immensely funny to watch at the same time, her sporadic appearances throughout the movie definitely eased the rather plain and at times dull storyline.

There were a few things about Salmon Fishing in the Yemen which I didn’t particularly like but I wasn’t expecting in all honesty I wasn’t expecting myself to fall in love with this movie so a few flaws were anticipated. One of the problems was the story was pretty lame, I didn’t quite get the point of what they were trying to achieve and the speed in which everything seemed to happen was pretty unrealistic to me. Also I didn’t see the necessity of adding a love triangle to the story, why can’t this movie be a simple drama with elements of comedy without dealing with the overused romantic angle? The worst part above everything else though was the scene where Alfred (McGregor) saved the Sheikh’s life by casting a fishing line at a man aiming a gun at the Sheikh which caught the guy in the face with the hook to cause him to miss his shot. I mean, come on now, I realise that this is a movie but that scene was so stupid that it took me a few moments to accept and move on from it.

Overall, Salmon Fishing in the Yemen was a half decent movie which had some good performances with likeable characters and a nice comedic dose to keep you entertained. However the story could’ve done with some work to make it a bit more interesting and the romance part of the movie was completely unneeded.