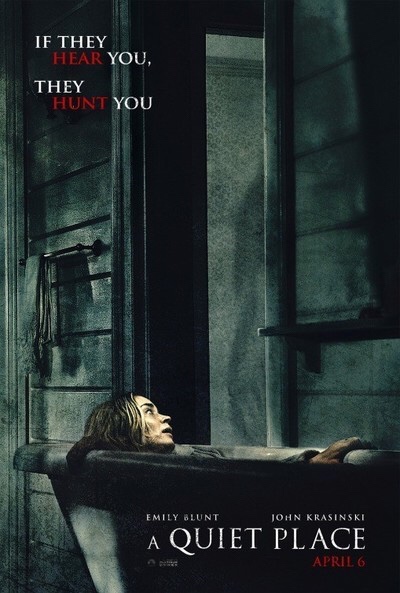 After an attack from an unknown alien species which attack sounds and have wiped out a large portion of the population, one family are living in silence and are adapting to their new soundless world.

Ever since first seeing the trailer for this movie some time ago I knew that it was a movie that I must see, especially in the cinema. Usually modern day horror movies just don’t do it for me and I prefer the older style movies from the horror genre as they feel more frightening and properly made as opposed to using cheap jump scares like most of the horrors over the past decade or so. While there were a few jump scares used in A Quiet Place, I felt that they weren’t cheap and meaningless and that they actually added to the tense atmosphere.

John Krasinski writes, directs and stars in this tense thriller which sees him play Lee, the father of a young family who are some of the few remaining people left in a world which has been destroyed and ripped apart from an unknown alien entity. These creatures are blind but react and attack noise so staying silent is a must in order to survive in their new world. His wife is played by real life wife Emily Blunt and the movie starts off with them having 3 children, 2 young boys and a girl. Fast forward a year into the future after having lost a son to the monsters, Evelyn (Blunt) finds herself pregnant with her due date looming. The noise and commotion that comes hand in hand with having a baby only lures the creatures to the family’s safe haven as they must do whatever they can to survive.

The husband and wife duo of Krasinski and Blunt deliver great performances and really show the art of acting through the use of facial expressions alone. The story was great and unique and was told impeccably well and the atmosphere was truly frightening. Even the child actors, Millicent Simmonds and Noah Jupe, deserve tremendous credit for their efforts too. While John Karinski and Emily Blunt will reap much of the attention and plaudits, those two young actors deserve just as much attention as them.

There were a couple of problems that I had with this movie but nothing too major to halt my enjoyment of the story being told. My main problem was the fact that Lee and Evelyn were expecting a child. In a world where you must be silent or perish, to end up pregnant seems completely irresponsible and is something that has the potential to put the entire family at risk and I just simply didn’t understand why such a risk was taken. Something that I would like to have seen incorporated into the story was the reason why this had all happened in the first place. While there were clues on the front pages of newspapers you never really get to understand why this began and where the creatures came from.

To conclude, A Quiet Place is truly a great suspenseful horror that will have you on the edge of your seat throughout. The story is told well and the acting from all involved was top drawer. Throughly enjoyable and would highly recommend.