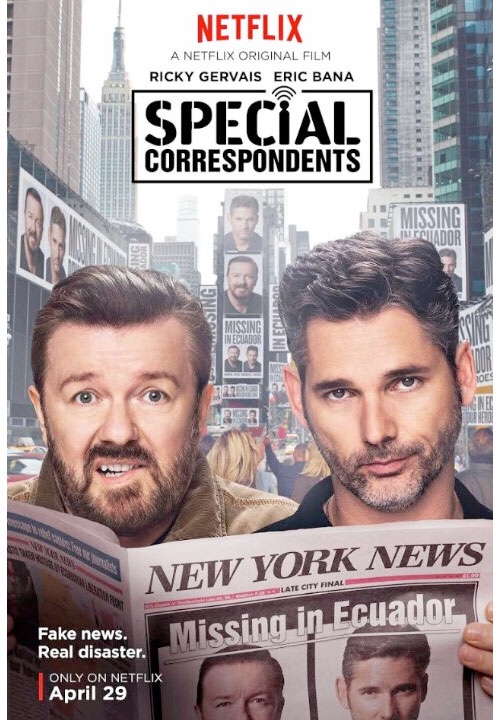 A radio journalist and his technician are given an assignment to cover the rebellion uprising within Ecuador. When their plane tickets and passports accidentally get thrown away they come up with a plan to report fake news, which includes their own kidnapping, from their hideout in New York.

I first want to start by confessing that I didn’t have many expectations for this particular movie. There are quite a lot of negative reviews online for this film and I’ve never really been the biggest fan of either main star, Ricky Gervais and Eric Bana. While I enjoy the stand up comedy work that Ricky produces I’ve never been 100% convinced by his performances in TV shows and movies that I’ve seen up until now. I used to be a fan of The Office when I was a teenager when it first hit the BBC but since trying to rewatch it as an adult I find it extremely poor and unfunny and is something that hasn’t stood the test of time. As for Eric Bana, he’s somewhat of a household name and could be considered as an ‘A-Lister’ but his movies and his performances blow so hot and cold it’s ridiculous. One movie he’s brilliant and looks like he’s one of the most talented guys around and then the very next movie he stinks up the joint, his consistency is severely lacking. With all that being said, Special Correspondents was available for download on Netflix and I needed something for my commute to work.

Thankfully I was pleasantly surprised by what I watched. The comedy was great throughout from all parties and the chemistry shared between Gervais and Bana was a treat to watch. They were both supported by a great comedic performance from Ugly Betty star America Ferrera and Vera Farmiga who I feel is more used to playing serious and dramatic roles does brilliantly in a light hearted one. She plays Ian’s (Ricky Gervais) wife who is rather fed up with a mundane life with little excitement and is an absolute bitch which Vera plays surprisingly well as she looks like somebody who would be a real sweetheart in real life. She uses Ian’s “kidnapping” to only promote herself and thrust her singing career into the spotlight while not actually caring about the well-being of her husband.

The story is well told and each character has their own personal journey to take which is interesting to see. Ian, realised he’s better off without his wife and has his eyes open to the fact that co-worker Claire (Kelly Macdonald) is totally besotted by him. Frank (Eric Bana) is a self involved narcissist who does what he wants, when he wants only to come to the realisation that what he does hurts everybody around him. I felt the plot was pretty unique and as mentioned previously was very well told although the script at times was a little lacking. I suppose that because Ricky Gervais was performing treble duty on this project (writing, directing and starring) I can cut him a little slack on certain parts of the script.

The only real gripe I can think of was the ending was a little predictable and felt a little rushed as though they had ran out of time or money and had to produce a finale really quick within a tight timescale or budget.

In summary, Special Correspondents was a laugh out loud comedy that delivered massively above all expectations and my best advice is to not pay attention to the online critics of this movie as it’s a rather delightful surprise.